Professional bowhunter Cameron Hanes (pictured above) shared with Fox News how he got his start, and his views on hunting.

Hanes didn’t dream of making a living as a hunter, but he did dream of using his love of the outdoors to write about hunting. His options increased when he discovered bowhunting during his teens.

“It started in high school and college,” Hanes said. “I didn’t really have a lot going on, and I needed an outlet for my energy. I found bowhunting and became enamored with it. I like the challenge. The challenge is immense – trying to get within bow range of an animal, and then to bring it down with essentially a sharp stick. That test is what really drew me to bowhunting. As a lifestyle, it gave my life direction when I didn’t have any.”

Hanes told Fox he respects the animals he hunts, and takes their lives seriously. “I prepare for the hunt like a professional athlete prepares,” he said. “If I’m going to kill the animal, I need to be my best, and I want it to be an ethical kill. It’s a big deal to take the life of an animal.” 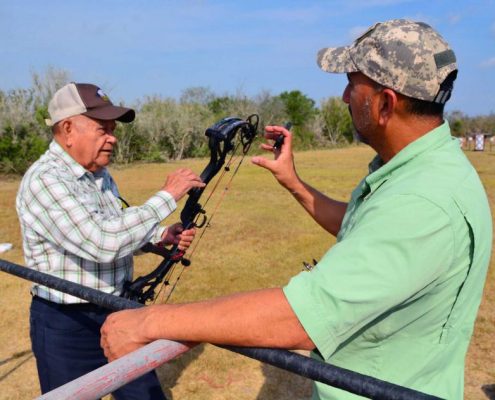 Archery pro Rudy Garza is an ex-conjunto musician who once played the bajo sexto at the Smithsonian Institution with original conjunto player Narciso Martinez.

Conjunto music originated in South Texas after German settlers brought accordions to America. Musicians mixed the accordion with the bajo sexto, and created the conjunto sound. The bajo sexto is a guitar and bass rolled into one instrument.

After retiring from music, Garza traded his guitar strings for bowstrings and opened a shop, Eagles Nest Archery, which he now runs. He told the Washington Post: “My dad was an avid hunter, but with a rifle. We went hunting, but I got to the point that you don’t feel the excitement to take an animal at 200 to 300 yards.”

Garza had dabbled with archery when he was younger, but later got hooked after seeing a demonstration by a professional archer. When he decided he needed a new career, he and his wife opened Eagles Nest Archery.

Both Garzas attended classes at PSE Archery, a giant of the U.S. archery industry, to learn bow basics and get certified on bow repair and construction.

Well-known bow manufacturer Earl Hoyt once built a South African hunter a custom bow with a 110-pound draw weight. When the hunter realized he needed custom arrows for it, he contacted Garza.

Bowhunting Exercises: Back and Shoulders
Scroll to top